2023: Why I chose Shettima as running mate — Tinubu 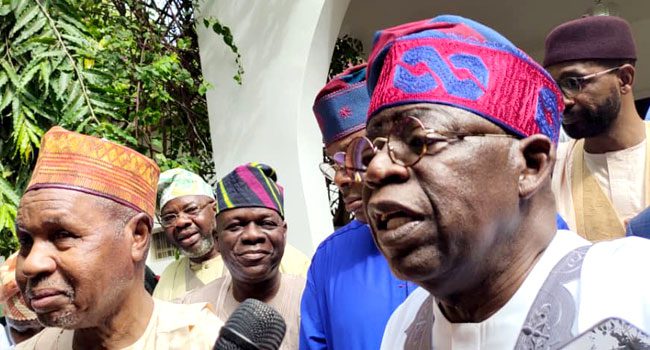 THE Presidential Candidate of the All Progressives Congress, Bola Tinubu, today, said he chose former Borno State Governor, Kashim Shettima, as his running mate because he is “competent and reliable”.

This was as he claimed that the APC has a better programme for the country and is ready to serve.

Tinubu said this shortly after he visited President Muhammadu Buhari at his Daura home in Katsina State.

Speaking shortly after a closed-door session with the President, he explained why he chose Shettima as running mate saying, “I chose him because he is competent, capable and reliable.”

On the purpose of his visit, he said “We came to pay homage to him (Buhari) and to share part of his holiday and lunch. And to discuss the question of my substantive running mate .

“The one we put in as placement has withdrawn today. There has been an announcement to replace him fully with a substantive candidate, Kashim Shettima.”

Asked about his party’s chances in next year’s presidential elections, the former Lagos State governor said, “We are going to win Insha Allah. Because we are a progressive party. We have the focus on the Nigerian problems and we face the challenge squarely and we’re not running away from it. We have a better programme for the people and about the people and we are ready to serve.

“Within a short period, there’s been a strong foundation on infrastructure. We faced a challenge of terrorism we know that. It’s only a poor thinker and observer who will not recognize the challenge. But once you recognize the challenge, you can prepare yourself very well to tackle it and defeat it. And that is what our party is all about.”

Earlier on Sunday, the placeholder for the position of running mate to the APC presidential candidate, Ibrahim Masari, announced his resignation to the party.

In a letter he signed and addressed to members of the APC Masari said, “This is to inform our esteemed party leaders under our able President, Muhammadu Buhari, teeming party members and the great people of Nigeria, of the outcome of a crucial discussion I just had with the flagbearer of our great party, the APC, Bola Ahmed Tinubu.

“I had the singular honour and privilege of being nominated as the running mate to Asiwaju Tinubu last month after a keenly contested presidential primary ahead of the 2023 general election.

“But, after much reflection and wider consultations, I now wish to step down. I realised that my decision will enable Asiwaju to have more latitude to give more accommodation and inclusion that will position our party to win the coming elections, with the support of the people of Nigeria.

“In stepping down, I believe I can still serve our party and the country in several other capacities.

“I wish to confirm that I have submitted my withdrawal letter and affidavit to that effect as the vice-presidential candidate to Asiwaju Bola TInubu in the coming elections.”