Lagos must not go under water 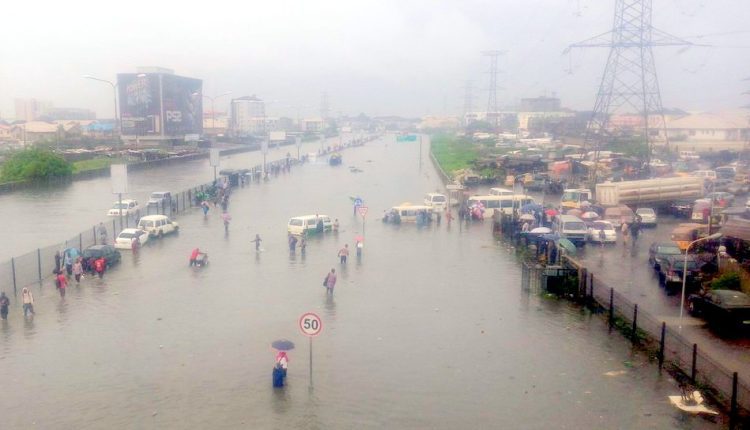 LAGOS, Nigeria’s former administrative capital and which still serves as the country’s commercial capital, is a city state like no other in the country. By a wide margin, it beats other states in many respects. People from all walks of life converge in Lagos for business and pleasure. The size of its economy is bigger than that of some African countries. However, this important melting pot is being threatened by a menace that has defied successive governments in the state. It is harassed by flooding, which has become a horrifying annual occurrence.

All it needs for Lagos to be in trouble is for rains to come down for hours. When this happens, as it did some days back, those residing in areas like Lekki Peninsula, Okota, Agbado, Agege and other areas in the mainland part find life hellish. Their roads are flooded and they become temporary lakes for boat rides. In fact, in some cases, boats are actually introduced to ferry inhabitants away from danger.

Needless to say that heavy downpours and the attendant flooding comes with tragedies. Lives are lost. Vehicles and their occupants are washed away. Properties are lost and livelihoods destroyed.

During last weekend’s heavy downpour in the state, 17 persons drowned in a boat accident. A bus fell into the canal and 12 occupants were miraculously rescued. Flooded portions of roads and gullies caused accidents. Lives and property were lost as flood water swept away human beings and cars and destroyed homes and business premises.

For the families of those who died, they are not just statistics; they were flesh, blood and relations. They were sources of joy, they were breadwinners. Now they are no more. The scars remain everlasting; and the next flooding season not only reminds them of an irreplaceable loss but renews the pain which time often fails to heal.

Incidentally, such incidents do not just happen. They no longer happen by surprise. Often times, there are prior signs, notices and even warnings, courtesy of technology. Recent incidents also had a prior notice that heavy rains were coming. In March, the Nigerian Meteorological Agency (NiMET) gave indications about the expected level of rainfall and temperature patterns; with high intensity rainfall forecasted for Lagos and other shoreline states.

The Lagos State Commissioner for Environment and Water Resources, Mr. Tunji Bello, and the Special Adviser to the Governor on Drainage and Water Resources, Joe Igbokwe, during the state’s 2022 Seasonal Climate Predictions, in Lagos, re-echoed NIMET’s forecast. They spoke of a high intensity annual rainfall of 1,750mm with attendant socio-economic implications for Lagosians, but urged residents not to panic.

Flooding has become a perennial issue in Lagos with massive rushing water that not only sweeps through properties with devastating effects, but lead to deaths and frustrations in the affected areas. The moment rains cease and the flood water recedes, life returns to normal and residents of flood prone areas continue with their businesses, awaiting another round of agony as the year turns.

Although the state government is aware of this annual predicament and obviously gives statistics of impending happenings and assurances of mitigation, it keeps recurring. But each administration can actually do more to minimise the pains, anguish and frustrations of Lagosians and avert any future occurrence. The causative factors are known, just as the remedies, but the tardy approach to solutions gives impetus to the recurring affliction.

In spite of the preachments by the aforementioned government officials in respect of this year’s episode, the rains still came and wrecked havoc of monumental dimensions. The measures which the state government claimed to have put in place during their March 2022 briefing was not seen as helping the matter. Unfortunately, it doesn’t look like the affliction is over as another round of heavy rainfall is expected in the coming month.

With the annual flooding in the megacity, it would ordinarily be expected that the state government should have found a lasting solution to the menace. As an aquatic state, it deserves one of the best drainage systems in the world. Although there are efforts to expand the Oko-Oba canal, speed should have been part of the design to ensure its completion before the setting in of the rains.

More than just putting in remedial measures to contain the massive flood water that washes the state’s table lands, the state government needs to take stern measures to curb the causative factors, where the menace is helped by human indulgences. Lagos is one of the most poorly planned cities in the world, and indiscriminate erection of structures and poor sanitation habits form the major causes of inland flooding, particularly in the mainland parts of the state.

Indiscriminate disposal of refuse, particularly in the drains, block water pathways and create basins that collect rain water and turn such areas into flood plains. The state government also needs to do something about plastic bags. For a state known for its celebration/party culture as well as other activities that promote massive use of plastic bags, it is long overdue for a robust anti-plastic waste policy because each time rain falls, the drainage channels are clogged with plastic bags. This, alongside Styrofoam cups, take-out packs and other disposables, flow with flood water and block available drains and channels.

Also, the state urgently needs a law to specifically regulate dredging activities. Illegal and indiscriminate activities of dredgers have created one of the most strenuous challenges to tackling flooding in the state. They have distorted the shorelines and altered flow patterns of lagoon and ocean water, leading to the overflow of banks and beaches and washing into mainland regions. There are reports indicating that the activities of dredgers are not checked. This state of affair is a major risk for the state and its inhabitants.

The town planning authorities need to move fast to uproot structures along the flood plains and uproot illegal structures on water channels. Laws governing urban renewal must be enforced and inhabitants made to obey such laws strictly. Sanitation matters must be taken more seriously than it is currently being done. Defaulters must not be allowed to get away with it or pampered with a slap on the wrist. Lack of severe sanctions has always been an incentive to impunity anywhere; and more so in Lagos.

Flooding is no doubt a global challenge, especially given the fallouts of climate change, but that is not enough reason to condone situations that are deliberately created or condoned for whatever reasons. The cost of the yearly toll caused by flooding in the city outweighs any other consideration for indulging non-conformists. Government has a responsibility to protect law-abiding citizens from the impunity of non-conformists. It must also take concrete steps to contain the visitations that come through natural causes.

Lagos must not be allowed go under water. Everyone, government and citizens, can ensure this does not happen. It is an important city state that must not be treated just like any other. It is important not just to Nigeria but to the global community whose presence is huge and profound. Every nation that matters has presence in Lagos. Most blue-chip companies have presence in Lagos. And key global organisations have no choice but to be in Lagos. So, a state like Lagos is too important and strategic to be crippled by flood. It must not be allowed to happen.

What we expect as the 2023 political campaign season begins

That electricity workers strike: It should not happen again