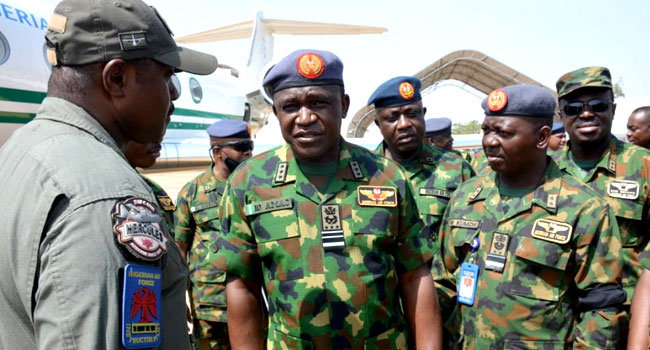 IN continuation of its intensive air operations, the military high command have said that the air component of the Operation Whirl Punch on Tuesday, August 30 neutralised 14 terrorists while conducting air interdiction missions against identified hideouts of the terrorist at Alhaji Isiaka and Kuduru in Igabi Local Government Area of Kaduna State.

The bombardments, NaijaTimes gathered were successful as the terrorists were eliminated, while several others sustained injuries.

It was also gathered that similar strikes were undertaken at Udawa along Kaduna – Birnin Gwari Road after the military troop received intelligence of the terrorists activities and cow rustling in the area.

“On receipt of the distress call, NAF aircraft were immediately scrambled to the location where they intercepted and neutralised several terrorists on bikes guiding the rustled herds of cattle.

“Feedback from local sources and own troops deployed around the area revealed that the terrorists suffered heavy casualties from the air strikes” a source in the know said.

Also, NaijaTimes gathered strikes were carried out same day in the Northeast at Amchile and Gargash, both terrorist locations in east of Maiduguri.

“The locations were attacked severally with few surviving terrorists seen fleeing from the point of impact and hiding under nearby trees which were subsequently attacked.

“It is clear from the foregoing that the Armed Forces of Nigeria and other security agencies have continued to sustain and maintain their onslaught on terrorists and their activities with varying degrees of successes.

“For as long as Nigerians continue to support the military and other security agencies through the provision of timely information on activities and movement of terrorists, the end to the current security impasse may just be in sight.”

‘My man must be born again, speak in tongues’ – Actress Bofie Itombra