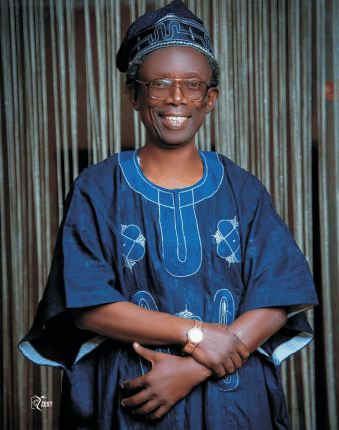 Consider it pure joy, my brothers and sisters, whenever you face trials of many kinds, because you know that the testing of your faith produces perseverance. – James 1: 2-3

I WANT to join the teeming number of people who have taken the time to celebrate the greatness of one of Nigeria’s tireless intellectual labourers and reformers of our time as he turns 70 this week. Indeed, seventy years has been a long time coming for our professor, and when you consider his over three decades of commitment to academic excellence, you will discover that his life has been nothing short of exceptional. Dasylva rejected the comfort of the privileges of working at a bank; he declined an appointment as a State Commissioner under military rule; he turned down many opportunities and, voluntarily, he entered the vineyard of labour and toil. He joined in the morning, suffering all day. Others joined later. And as the others who joined late received greater blessings, some moving to Aso Rock, some to Lekki Phase-This and Lekki Phase-That, Dan-bin-Silifa, his Aboki name, fatigued and broken, began to complain. His rebuke was recorded by his mentor and companion in Matthew 20: 1-16:

‘These last worked only one hour, and you have made them equal to us who have borne the burden of the day and the scorching heat.’ But he replied to one of them, ‘Friend, I am doing you no wrong; did you not agree with me for a denarius? Take what belongs to you and go; I choose to give to this last the same as I give to you. Am I not allowed to do what I choose with what belongs to me? Or are you envious because I am generous?’ So the last will be first, and the first will be last.”

Dasylva retired from the University of Ibadan at 70, with a send-off served with the delicious meals of strike and hunger, pain and anguish. I heard the voice of Chris Ngige, Nigeria’s Minister of Labour, the doctor who practices politics, saying:

Take the poverty that belongs to you

Purchase your generator and diesel

I choose to give to this last Area Boy

The same as I give to you.

Am I not allowed to do what I choose with the Niger Delta revenues that belong to me?

Or are you envious of Senator Lagbaja because I am generous?

So the last olodo will be first, and your UI, the best and the first, will be the last.

The “last” will not be your portion.

For many people, when they turn 70, they sign off from a battle well fought and hope that those behind them continue to tread the path they have blazed. Given Professor Dasylva’s penchant for going above and beyond, I am sure he is doing more than this. This great man is still young at heart and has so much impact to make in the lives of those around him. I believe he still has a lot of enlightenment and illumination to bring to African literature and culture. So, while we celebrate him as a septuagenarian today, we are also certain this is a new phase of his life in which he will keep his tap of wisdom open for us to draw from, drink from, and make ourselves better.

As torrents of congratulatory messages flow in for Dasylva, I do not believe mentioning everything can ever summarise his iconic impacts on African culture and knowledge, nor can we subsume his academic excellence under a few pages of literature. His 70 years on earth have been what everyone wishes for. His 35 years in the service of academic excellence and reformation make his life desirable, and it is one thing we cannot all stop talking about. In Yoruba colloquialism, when you refer to someone as igi iwe, you are saying that that person has maintained a high level of scholarship and has been found qualified to lead others in the same light. You are saying he has grown, planted scholastic roots beyond ordinary imagination, and spread his branches to give room for others to grow. This igi iwe rightly describes my good friend, Olori’nla, with his academic sagacity and the continued leadership and mentorship efforts of others who are driven towards widening their scholarship horizon.

However, considering how well the amiable professor has raised the standard, I am tempted to call him Iroko, that is, one who has transcended humankind’s ordinary life and is now in a category of his own, setting standards, breaking his own established standards, and setting more for those following his footsteps to draw inspiration from. And Dasylva is not just an inspiration for his protégés, those of us who are his peers also occasionally tap from his wisdom in countless deserving situations. If I can recall, there are no instances where I called on him that he would not be eager to contribute his support and give words of wisdom.

In the years I have known Professor Dasylva, his literary prowess has always been well-talked about, a factor that continues to benefit him and those around him. His mastery in the classroom is one thing we all envy. I had earlier read a statement from one of his former students about how incredible the mode of teaching Dasylva adopts in his classroom is, a style that deliberately ensures that everyone is carried along and made to get the total value and appreciate the beauty of literary work in his class. This former student explained how Professor Dasylva, while teaching “Unseen Poetry,” drew a well, a bird, and other characters illustrating what the poem signifies. He did this to pass a strong message to his students that he welcomes going the extra mile as long as those under his tutelage are getting value and becoming a better version of themselves. The interesting thing about this is that this situation occurred when Professor Dasylva started his lecturing career at the Oyo State College of Arts and Science (OSCAS). If not anything, this testimony tells us that Professor Dasylva has been a refined man who has always put the interest of the scholarship of his students at the forefront. He adopts this method, alongside other interesting and captivating teaching modes, to give the best of himself to his students and peers. Today, he is revered by hundreds of students who have passed through his tutelage and mentorship.

Only a few people like Professor Dasylva have committed a good part of their lives to defending African culture. Dasylva does not just exemplify the African way of life; his life demonstrates that he is an enigma whose behavioural attitude cuts across traditional and contemporary African lifestyles. He has made enormous contributions to Africa in different ways, and his name will continue to ring a bell in years to come. Aside from being an African literary talent, he is also the coordinator of the Ibadan Cultural Studies Group, where he has devoted efforts towards promoting African excellence and rapport with other continental cultures worldwide. His unashamed support for and pride in African culture is also why he is the convener of one of Africa’s most prominent Pan-African conferences, the Toyin Falola Annual International Conference on Africa (TOFAC) and the African Diaspora. As the one in whose name the conference is being held, I can boldly say that no one else could have been a better fit into the role of convening Africa’s brightest minds to discuss Africa and the African Diaspora than my great friend, Ademola.

Sometimes when you consider that someone has spent more than three decades imparting lives and widening the horizon of scholarship, you pause to ask whether there are any other contributions to be made, especially towards the progress of academics in Nigeria and Africa. The great thing about Dasylva is that he is an all-rounder, and from whatever angle you want to approach his impact, there will always be a ton of things to point at. He is an academic intelligentsia and an activist whose drive has birthed some great reformations in today’s institutions of learning.

A year or two ago, Professor Dasylva documented and sent for publication the perceived ills in the Nigerian university system without caring whose ox was gored. All he wanted was for sanity to be restored among academicians and the university system. Aside from this, I recall reading about how he rose to the occasion when it was time for his institution of teaching, Adeyemi College of Education, to have a union. Professor Dasylva himself recounted how the absence of a union for college lecturers created a vacuum when he was a lecturer at the Adeyemi College of Education and how, in conjunction with other positive thinking leaders in the academics, they were able to form the College of Education Staff Union (COESU), a union, which today, defends the rights of colleges of education staff while maintaining the standards of teaching and learning in the different colleges of education around the country. Indeed, his exploits as a reformer will continue to remain outstanding.

As a Yoruba man, Professor Dasylva’s representation of the omoluabi phenomenon, even under severe pressure, should be studied. He is not just an enigma in that stance; he has shown over the years, through his charisma and professionalism, that all that defines the omoluabi phenomenoncan never be found short in him. I read a story where Dasylva narrated his role in the actualisation of the June 12, 1993, general election mandate suppressed by the late General Sani Abacha. He revealed how he was never moved by the dangling of political positions in the face of activists seeking the June 12 actualisation. He recalled how, in order to maintain his integrity, he severed his relationship with a former activist who had jumped ship to be part of the oppressive political class of the Abacha regime. Obviously, one only needs a quick peek into Professor Dasylva’s activism to understand how maintaining his integrity–a conclusive proof of his omoluabi – is important to him.

Given Dasylva’s personality, one could go on to recount his remarkable life and outstanding contributions to academia, African literature, institutional and national reforms, and the betterment of the lives of those around him without running out of what to say. Professor Dasylva will continue to inspire everyone, far and near.

Ọmọ Akin, as you begin another phase of your life, I pray you continue to soar high among the stars in academic scholarship. I am no poet like you, but perhaps there can be one useful line in my amateurism:

With strength, power and wisdom

In your lessons and teachings

You taught about sacrifice

Forest of a big head

The trunk that carries the Olúmọ rock

Championing rule of law at home and criminality abroad