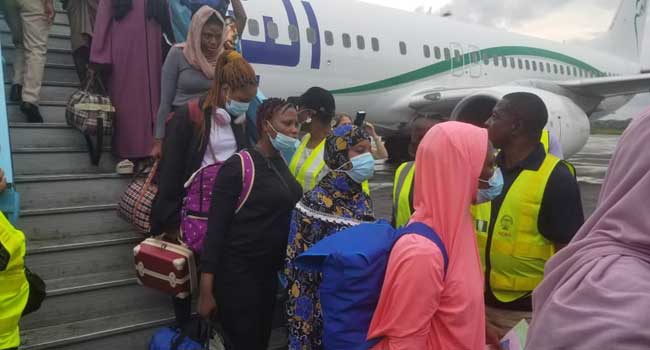 The Chargé D’affaires of the Nigerian Mission to Libya, Amb. Kabiru Musa, who confirmed the development in a statement in Tunis, said the exercise was carried out in collaboration with the International Organisation for Migration (IOM).

He added that the continuous evacuation of Nigerians stranded in Libya was part of the Federal Government’s drive to ensure the safety of Nigerians across the world.

Upon arrival on Tuesday night at the Cargo Wing of the Murtala Muhammad International Airport, Ikeja, they were received by Mustapha Ahmed, the Director General of the National Emergency Management Agency (NEMA).

Ahmed, represented by NEMA Lagos Territorial Office Coordinator, Ibrahim Farinloye, charged them to see their return as an opportunity to develop themselves.

Upon profiling, the number of female adults was 62 including a medical case, female children were 12 and five infant females.

The number of adult males was 64 with seven male children and nine infant males making a total of 159 altogether.

On November 1, a total of 117 Libya Returnees arrived in Nigeria, bringing the number to 276 within a space of two weeks.

Nigeria, Canada can do much more together – Osinbajo

We have labour shortage in the UK, envoy tells Nigerians