Lawmaker, who slumped at Tinubu’s rally, laid to rest 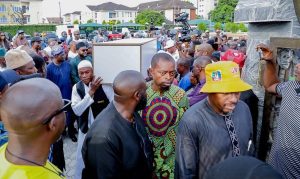 THE remains of Abdul-Sobur Olayiwola Olawale, a Lagos State lawmaker who passed on in Jos, Plateau State, during an APC Presidential rally yesterday, have been laid to rest.

The News Agency of Nigeria (NAN) reports that the remains of the lawmaker arrived at the Murtala Muhammed Airport in the afternoon and were immediately conveyed to his residence in Mushin, Lagos State in a motorcade.

The remains were received at the airport by the Speaker of the house, Mudashiru Obasa, the Lagos State Legislators Wives Association (LASLEWA), friends, family and associates of the deceased.

The body was later moved to the Ebony Vaults, Ikoyi, where Gov. Babajide Sanwo-Olu and his deputy, Dr Obafemi Hamzat, joined the crowd of mourners.

The body was interred according to Islamic rites.

A native of Abeokuta, Ogun, Olawale was reported to have slumped at the Rwang Pam stadium Jos, Plateau State, venue of the APC Presidential Campaign from where he was taken to a nearby hospital and later confirmed dead.

Omititi as he was fondly called by his constituents, friends, associates, political loyalists and admirers was born on March 12, 1964.

The lawmaker was visibly healthy as of Friday when he took an active part as a goalkeeper for one of the teams in the novelty match played by members to commemorate Obasa’s 50th birthday.

NAN reports that the assembly had yesterday, announced the demise of the lawmaker, who, until his demise, represented Mushin Constituency II and chairman, House Committee on Local Government and Community Relations.

The Chairman, House Committee on Information, Strategy and Security, Mr Setonji David, said his death really hit them below the belt.

According to him, “We will all miss him more than words can express. We urge you to join us in prayers for his family at this time.”

He is survived by his wife and children.

FG partners farmers to cushion the effect of flood