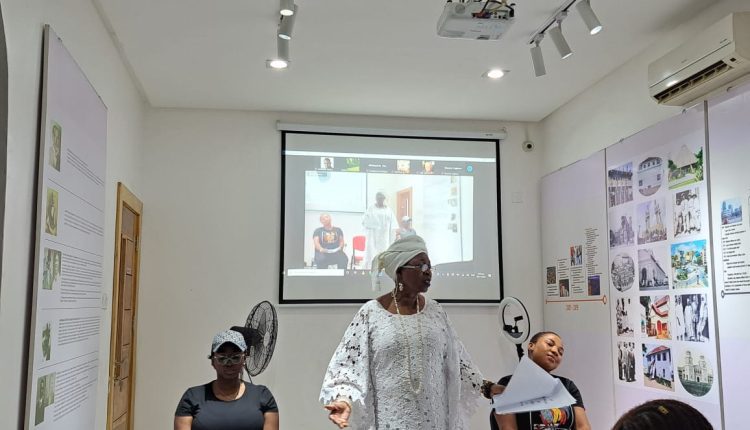 “AN Alphabet of Loss,” an elegy to the 26 young Nigerian women who drowned in the Mediterranean five years ago will be performed as a Stage Reading at the Lagos Fringe Festival on Sunday, November 27.

Written by Aduke Gomez, poet, lawyer, and art activist, only an excerpt of the play as directed by the playwright, director, and theatre teacher, Dr. Bisi Adigun, will be presented at 3pm in the Esther’s Revenge (VIP section) hall of the Freedom Park located at Broad Street, Lagos Island.

The play is designed to memorialise the tragic episode of the 26 Nigerian women, whose lifeless bodies were found by rescue workers from the Spanish ship Cantabria in the harbor of Salerno, Italy, on Sunday, November 6, 2017.

An article titled, 26 Young Women From Nigeria Found Dead in Mediterranean Sea by Gaia Pianigiani and Christine Hauser, in the New York Times, reported the incident as follows:

THE bodies of the 26 young Nigerian women and girls were retrieved from the Mediterranean Sea over the weekend and taken to Italy, where officials said on Tuesday they were investigating how the women died.

The young women from Nigeria, who may have been sex trafficking victims, died as they were trying to reach the Italian coast.

“It is a tragedy for mankind,” said Salvatore Malfi, the prefect in the port city of Salerno, where the bodies arrived along with 400 migrants who were rescued in the central Mediterranean in recent days.

“I think prosecutors will start working soonest to evaluate whether it could be homicide,” he said in televised remarks, adding that autopsy results for the women could be released publicly in weeks.

The young women were estimated to be between the ages of 14 and 18, said Marco Rotunno, the communications officer for the United Nations High Commissioner for Refugees in Italy. Their bodies were found floating in the water by the Spanish Navy on Friday, and survivors on nearby rubber dinghies, which had partly capsized, told the authorities that they were Nigerian and had departed from Libya.

Since the corpses arrived in Salerno on Sunday, no one has stepped forward to claim them as family members, Mr. Rotunno said. He said 400 migrants also landed on the same day. “So there was not a chance to speak with all of them, but probably they were not relatives of these girls,” he said.

When such groups of young women and girls are alone, the probability is high that they are victims of sex trafficking rings, he said.

“For Nigerian girls, it is pretty standard, the issue of being trafficked,” he said. “It is a regional network, unfortunately. I have seen younger than 14, and they were alone and from Nigeria.”

The women were in dinghies that left Warshefana, an area outside Tripoli, Libya, late last week, and capsized in bad weather, Mr. Rotunno said, citing accounts later provided by the survivors.

“People at sea were trying to swim; most of them don’t know how to swim,” he said. “They have never done it.”

On Friday, the Spanish vessel Cantabria saved 64 people and recovered the bodies of 23 of the young Nigerian women from one of the boats, the International Organization for Migration said on Tuesday. About 50 people were still missing, it said.

“On the sunken vessel, there were several very young Nigerian girls,” the statement said.

In a separate operation, an Italian naval ship retrieved the bodies of three women from another inflatable boat that was transporting about 139 migrants, transferring them all to the Cantabria, the I.O.M. said. Eleven migrants from that boat are missing.

“This tragedy affects a group of people particularly at risk,” said Federico Soda, the director of the I.O.M. Coordination Office for the Mediterranean. “It is very likely that these girls were, in fact, victims of trafficking for sexual exploitation.”

He said the I.O.M. has estimated that 80 percent of Nigerian girls arriving in Italy by sea may be victims of trafficking.

Thousands of people have fled or been trafficked in the perilous routes across the Mediterranean Sea for Europe. The latest deaths bring the total number of deaths in the Mediterranean in 2017 to 2,925, compared with 4,305 during the same time last year.

“It is more difficult than ever to forecast the trend right now,” Mr. Soda said. “The number of departures from Libya has slowed in the last four months, but we are still seeing large numbers being rescued and brought to Italy in relatively short periods of time.”.

Manchester United put up for sale by Glazers, valued at £5bn

‘Not Abuja or Lagos artists, we just want to create spaces for artistic growth at…