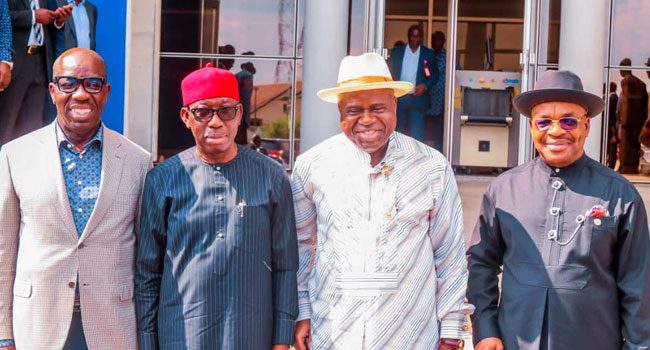 AT a meeting yesterday in Yenagoa, Bayelsa state capital, governors of the Peoples Democratic Party (PDP) in the South-South expressed their support for the party’s presidential candidate, Atiku Abubakar and Ifeanyi Okowa.

Nyesom Wike, the governor of Rivers State, was notably missing from the meeting. The G5 group spearheaded by Wike, are aggrieved that the PDP’s national chairman (Iyorchia Ayu) and presidential candidate are both from the north, despite their repeated calls for Ayu to be replaced by a southerner.

After the meeting, Obaseki spoke to the media and stated that the purpose of the gathering was to promote Atiku and Okowa ahead of the 2023 general elections.

He mentioned that the regional governors of the party also gathered in Bayelsa to express support to a colleague whose state had lately been devastated by flooding.

“We have a PDP South-South Governors Forum and our vice presidential candidate, Dr Ifeanyi Okowa is our Chairman and we decided to host a meeting of the Forum in Bayelsa this evening to have an opportunity to come and visit our brother who has gone through so much in the flooding crisis we have here,” he said.

“It also afforded us an opportunity to discuss matters of mutual interest to us PDP governors ahead of the next presidential and national elections.

“We also want to use the opportunity to come and show support and also find out from our brother, the vice presidential candidate, Dr Ifeanyi Okowa on the goings on on the national level and to reiterate our total support for the candidacy of President Atiku Abubakar and to assure them that we are here.”

KANO: Lawmakers commit to pass laws that will improve the standard of living

2023: Again, Kwankwanso rules out stepping down for Atiku