Leading the way home: The Guardian view on the Benin bronzes 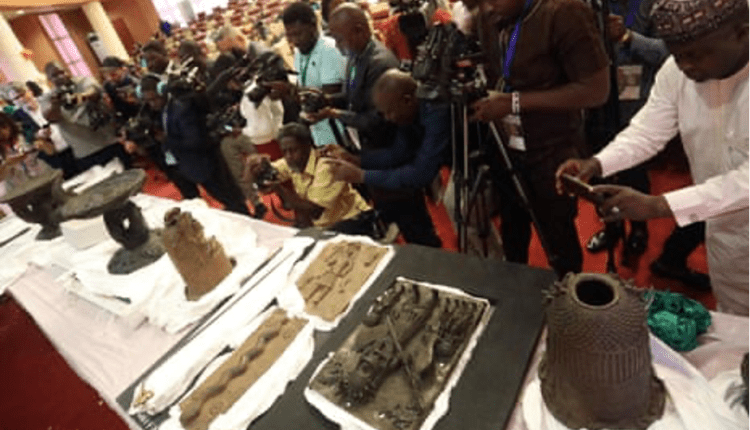 Originally titled “The Guardian view on the Benin bronzes: Leading the way home”, the article is culled from www.theguardian.com.uk)

Photo: Benin bronzes returned by Germany on display at the Nigerian ministry of foreign affairs in Abuja in December 2022. Photograph: Kola Sulaimon/AFP/Getty Images

THE ceremonial return of 21 Benin bronzes to Nigeria by Germany last month gave the latest powerful signal of how fast the international tide is turning on the repatriation of looted art. The German handover followed an American one-two months earlier when the Smithsonian Institution signed over 29 bronzes in Washington. Both ceremonies turned the spotlight once again on the country whose army was responsible for seizing the bronzes in the first place: Britain.

The restitution of artefacts is an old bone of contention that has left the British Museum, in particular, beleaguered on all sides. The defence has often focused on how works arrived in museum collections: whether they were honestly acquired or stolen by individuals or armies. In the case of the Benin bronzes, there is no ambiguity. They were looted in 1897, when British forces sacked the Benin kingdom, in modern-day Nigeria, burning down the royal palace, exiling the oba (ruler), and seizing all royal treasures.

Most ended up at auction in London, where an estimated 3,000 objects eventually made their way into museums and private collections around the world. Ownership of more than 1,000 bronzes that ended up in Germany was legally transferred to Nigeria last July, five months before the symbolic handover, in the capital, Abuja, of the 21 outstanding items.

Several of the UK’s smaller institutions have also joined the great repatriation of Benin plunder, with the University of Cambridge last month pledging to return more than 100 objects, after similar moves by Jesus College, Cambridge, and the University of Aberdeen. The Horniman Museum in south London returned six bronzes in November.

Each handover piles more pressure on the British Museum, which has more than 900 artefacts from Benin in its collection, but has recently been more occupied with trying to find a compromise with Greece over the future of the Parthenon marbles. Unlike its smaller siblings, the British Museum is forbidden by law from disposing of its holdings unless they are duplicates, irreparably damaged or unworthy of a place in the collection. In the case of the Parthenon marbles, the chairman, George Osborne, has been trying to sidestep this legal barrier with behind-the-scenes attempts (unsuccessful so far) to reach a loan agreement with Greece.

The Benin bronzes cast the legislation in a different light. They might not be duplicates, damaged or unworthy, but there is only room to display 100 of them at any one time in the British Museum, making them a prime hostage of what the Canadian author Malcolm Gladwell has described as the “dragon psychology” of modern museums: an instinct to hoard for hoarding’s sake.

This year marks the 40th anniversary of the National Heritage Act, which locked several other national museums into a similar bind over the disposal of their possessions. Tristram Hunt, the director of one of these, the V&A, argued last year that it was time for the act to be repealed, enabling institutions to sharpen up their act and respond to the ethical demands of a changing world. It is a conversation that is badly needed if the UK’s national museums are not to become bywords for postcolonial backwardness.

Our ordeals working in Texas prisons, by Nigerians

Prince Harry’s book could be ‘beginning of end’ for royals, warns Charles’s…