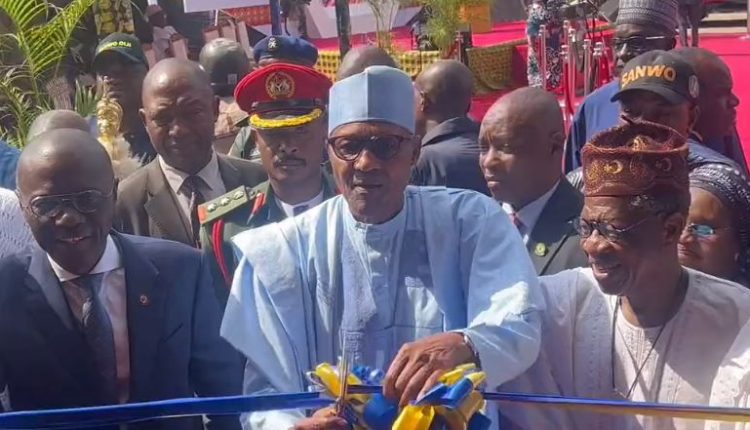 The President alongside Governor Babajide Sanwo-Olu of Lagos State and his deputy, Obafemi Hamzat commissioned the project at the Marina Train Station in the state.

The President also witnessed the signing of the commencement of the Phase 2 of the project from Mile 2 to Okokomaiko.

Speaking at the programme on Tuesday, Sanw-Olu thank the President for his support to the state including tax breaks and waivers granted on the project.

Buhari, who did not make a speech at the event, earlier on Tuesday commissioned the JK Randle Centre For Yoruba Culture And History.

The projects are part of a series of facilities being commissioned by Buhari during a two-day visit to the state.

See full statement by the Presidency:

President Muhammadu Buhari on Tuesday inaugurated the first phase of the Lagos Blue Rail Line, taking a ride from the Marina Station to National Theatre Station.

The President was aboard the trip with Lagos State Governor, Babajide Sanwo-Olu, Deputy Governor of the State, Dr Obafemi Hamzat, members of the Federal and State Executive Councils, members of the Federal and State Legislative Assemblies, President of China Civil Engineering Construction Company (CCECC), Chen Sichang and journalists, among others.

The first phase of the project, executed by the State Government, which spans 13 kilometers, has five stations – Mile 2, Suru-Alaba, Orile Iganmu, National Theatre and Marina.

In his remarks, Governor Sanwo-Olu thanked the President for the State Visit to commission several landmark projects, noting that since 1999 the State has not enjoyed this level of support from the Federal Government.

On the benefits of the project, the Governor stated that it would reduce travel time, improve the quality of life of citizens and make Lagos one of the most resilient mega-cities in Africa that would compete favorably with other megacities around the world.

Sanwo-Olu hinted that he would invite the President again to Lagos to commission the Red Line, which he described as a bigger rail corridor project compared with the Blue Rail Line.

‘‘This iconic Marina Station would be the largest and busiest in Africa. It has the capacity to process about 450 passengers per minute, meaning that in an hour this station can process about 25,000 passengers,’’ he said.

Hamzat, the Lagos Deputy Governor, traced the pioneering role of the presidential candidate of the APC, Asiwaju Bola Ahmed Tinubu, in envisioning and laying the foundation for the project, as governor of Lagos State.

‘‘Talking about the Blue line without making a reference to the ground-breaking contributions of the presidential candidate of our great party, Asiwaju Bola Ahmed Tinubu, is like talking about the beach without the ocean.

‘‘A visionary leader, Asiwaju Tinubu pioneered the idea of the Lagos Blue Line and many other revolutionary initiatives.

‘‘The Tinubu administration developed the Strategic Transport Master Plan (STMP), which laid out the foundation for a network of robust and modern transport infrastructure befitting a 21st century City-State, such as ours.

‘‘The master plan has six rail lines and one monorail, 14 Bus Rapid Transit (BRT) corridors, over 20 water routes and a number of major roads.

‘‘Thanks to Asiwaju’s creative leadership, today, we are making history with the completion of this rail line,’’ he said.

Chinese Ambassador to Nigeria Cui Jianchun said the completion of the first phase of the project is a demonstration of the harmony in the bilateral relations between Nigeria and China.

‘‘It is a harmony in integration, diversity, and development,’’ he said.

Earlier, before leaving Lagos for Dakar, Senegal, President Buhari also inaugurated John Randle Centre for Yoruba Culture and History, after which he toured the facility.

Special Adviser to the President

IGP: All police officers due for retirement must proceed – PSC

2023: Buhari will relocate to Daura after handing over – Lai Mohammed