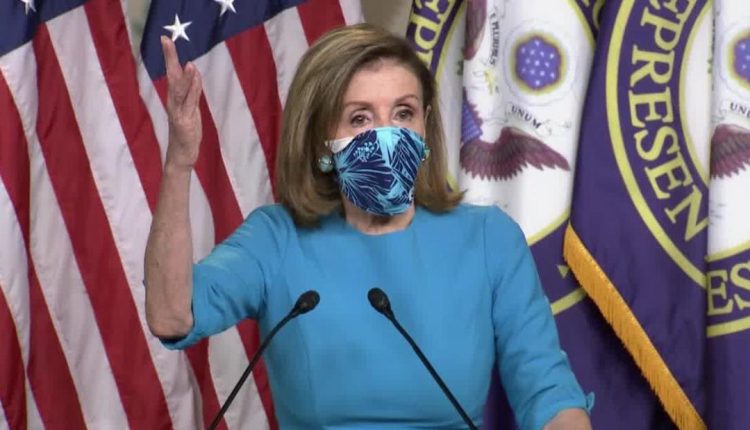 Speaking at a news conference at the U.S. Embassy, the speaker said, “The Chinese have tried to isolate Taiwan, keeping them most recently from the World Health Organization,” pointing to the pressure Beijing applied to block Taiwan from attending the WHO’s annual assembly in May.

“They may try to keep Taiwan from visiting or participating in other places, but they will not isolate Taiwan by preventing us to travel there,” she said.

Responding to a question asking if the visit was more about burnishing her credentials than benefiting Taiwan, Pelosi called the suggestion “ridiculous.”

“Taiwan is one of the freest countries in the world,” she said — calling the self-governing island a country — and describing the visit as a celebration of Taiwan’s democracy, economic success and its efforts to advance the rights of LGBT+ people.

Under the “One China” policy it has maintained for four decades, Washington “acknowledges the Chinese position” that there is but one China and that Taiwan is part of China. The U.S. recognizes the Beijing government as the “sole legal government of China,” but does not explicitly recognize Chinese sovereignty over Taiwan.

This is distinct from Beijing’s “One China” principle, which considers Taiwan a Chinese province and part of its sovereign territory. Taiwan has never been ruled by Communist China, although Beijing views it as its own and refuses to rule out a military invasion.

The speaker said there is overwhelming bipartisan support in Congress for peace and the status quo.

Pelosi acknowledged that there is a need for the U.S. and China to collaborate on global issues such as the climate crisis. But she emphasized that it is crucial to speak about China’s human rights issues.

“If we do not speak out for human rights in China because of commercial interests, we lose all moral authority to speak out on human rights any place in the world,” she said. “China has some contradictions. Some progress in terms of lifting people up, and some horrible things in terms of the Uyghurs that have been labeled a genocide.”

Earlier in the day, Pelosi had a one-hour breakfast meeting with Japanese Prime Minister Fumio Kishida at his residence in central Tokyo.

Kishida noted that the Chinese military exercises around Taiwan are a “crucial issue related to the national security of Japan and the safety of our people.” The two confirmed the necessity for the allies to continue to cooperate to preserve peace and stability in the Taiwan Strait.

Pelosi expressed condolences to the Japanese side over the death of former Prime Minister Shinzo Abe.

The two discussed ways to strengthen the U.S.-Japan alliance and to advance a free and open Indo-Pacific, and also exchanged views on North Korea, Russia and a world without nuclear weapons, Kishida told reporters.

U-20 WWC: Falconets off to Costa Rica as Danjuma names final squad