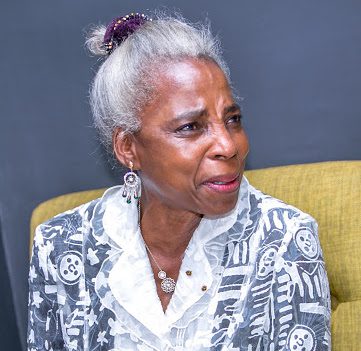 ‘Thanks for picking up after our mess, for the memories, the stories, the firmness, that intonation, and the great sense of humour!’

HOPE you had a happy birthday @Iyabo Aboaba, here’s wishing you a glorious 75th, and blissful and happy years ahead in good health, you’ve served our community all these years, managing key spaces where careers have been built, dreams came true and amazing memories have been made.

Thanks for picking up after our mess, for the memories, the stories, the firmness, that intonation, and the great sense of humour!

I recall your class act rendition of the regular Lagos Island local, wandering into Freedom Park with swagger in the early days with their girl in tow, saying to them with bombast “Je a ma lo jo, je’n ra shicken and ships fun e.” (Had to ask Nike for the exact words, but I was laughing even before retrieving the words 😁).

I also recall one of my earliest encounters with the legendary Aunty Iyabo.

I had built a set for a stage performance at MUSON Centre and thought it was a good idea to see how it performed in use. So I presented myself at one of the shows, seeking entrance, in other words, ”claiming staff”. Aunty Iyabo was there o! You have to read Aunty Iyabo’s lines with that aristocratic intonation of hers and picture her with a straight back and an even straighter face to know how intimidated I felt.

“I’m part of the crew. You know, we built the set (feeling smug)

“Alright, but were you paid?”

“Er…” .(not liking where the conversation seemed to be headed).

“Were you paid for your services?”

“Then you have to pay for a ticket.”

I WAS always intrigued by this Iron Lady of Muson persona and had a couple of other experiences with her, including one where she actually sided with me against her staff who were in too much of a hurry to smash our set after an event, despite our crew being on hand. It felt glorious, like “A whole Mama agrees with me that you people are wrong!” kind of bragging right.

BUT that’s nothing compared to the sweet God-Mother phase that was to come during the Freedom Park days, when Mama as our Landlady gave us every imaginable kind of support to make DADA stores work, including waiting till we locked up at night to give us a ride to the mainland, during which she regaled us with great stories, and constantly asking after our welfare even after we closed up shop. Mama just became family.

Wish you all the very best ma, and thanks for the memories.

*Arigbabu is the CEO of Design and Design Art Agency, DADA